My older girls are on day three of being home from school since big sister has strep throat.  This afternoon Gigi woke up from her nap a little cranky and felt warm.  I feel her cheeks and forehead only about fifty times a day waiting for her to come down with something, but the doctor said that it’s rare for an infant to get strep.  Anyway, I decided to take her temperature which was 99.3 rectally.  I couldn’t remember if this was a temperature of concern or not so I speed dialed the pediatrician.  Before I had this baby I used to hesitate to call the pediatrician and I hardly ever did.  I didn’t want to be pegged as a neurotic mother.  Now that I have Gigi I don’t hesitate to call since I feel like her having Down syndrome is a good reason.  I finally know the office’s number by heart.  Lately I’ve been calling without hesitation because my other kids are sick, or myself with the flu, and I say

They do pay a little bit of extra attention but the world doesn’t stop.

So I asked the nurse today if I need to worry about this type of temperature seeing that she’s three and a half months old and that her sister has strep.  She told me 99.3 is not even a temperature of concern; 100.4 and above is considered a temperature and that it can be treated with Tylenol.  Even if Gigi had 100.4 or above no trip to the ER is necessary since she’s past the 90 days of age mark.  Fast forward a few hours she’s cool as a cucumber.  I probably just had her overdressed.

After I hung up the phone panic set in as I realized that I forgot to mention she has Down syndrome.  Then I thought, that’s ok, they probably knew that when they asked for her name.  The computer screen probably went red and flashed a large “Trisomy 21” in bold white letters when they looked her up.  In reality, that probably didn’t happen because I don’t recall hearing the alarms in the background.  Whether or not the nurse knew she had Down syndrome when I spoke to her on the phone, here’s my point: that I realized it doesn’t matter all the time that she has Down syndrome.  And, I’ve begun to realize I don’t remember it all the time.  Right now she’s just like any other baby.  As Dr. Skotko told me, “pay attention to the other 46 chromosomes and not the extra one” because that’s what’s important. 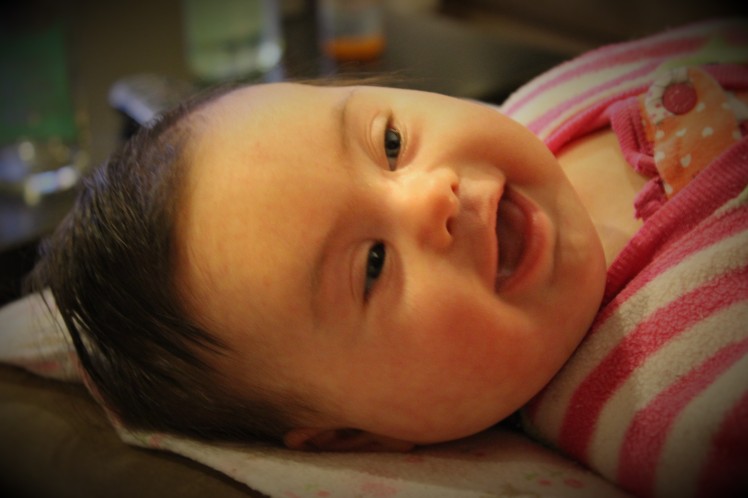